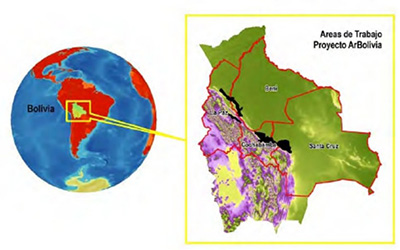 The settler areas of the Cochabamba Tropics, the Province of Ichilo in the department of Santa Cruz, Northern La Paz, and Western Beni.

From a biophysical perspective the portfolio area is quite uniform; the terrain is relatively flat, the precipitation and temperature patterns do not fluctuate significantly and the soil texture and depth remain relatively homogeneous throughout. The Andes mountains are located immediately south of the portfolio area. The rivers flow in a north-easterly direction. The portfolio area ranges in elevation from 250 to 450 meters above sea level. More than 75% of the area has a slope angle of less than 5%.

There are five climate stations within the portfolio region. Average annual rainfall is highest in the La Jota station with an average of 4449 mm, with most precipitation falling between the months of November and March. Going further to the north and east average annual rainfall decreases to 1725 mm.

The average annual temperature is 24.7oC. Average declines during the months June and July. Temperatures are between 6oC and 39oC. From May to September, temperature can drop down for several days, due to cold winds coming from the south (called surazos). These relatively short periods with low temperatures are generally combined with intensive rainfall. 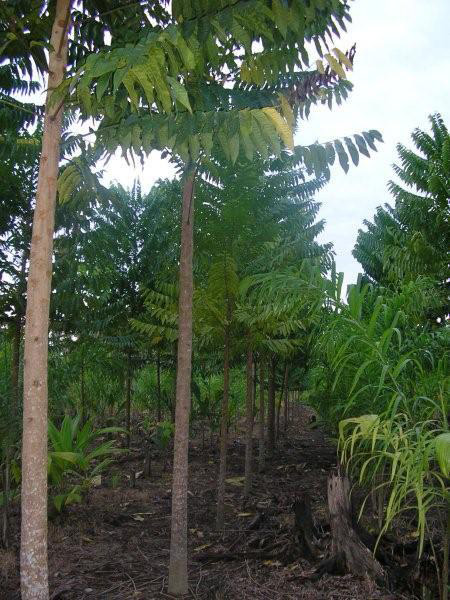 The project not only proposes reforestation as beneficiary activity for the future but also more efficient production systems, like agro forestry systems and silvopastoril systems. That way work and income are generated for the involved families. The principle economic impacts identified by the farmers as the principle beneficiaries of the project are referring to changes in the level of employment, salaries and as a consequence the level of income of the farmers.

The farming alternatives in the area are analysed in order to show the socio economic impact of the project. The most developed activities are: rice cultivation, cattle farming and on a smaller scale banana and citrus fruits. In the following paragraphs a summary of the study is outlined. The incomes for these activities (rice and cattle) have been calculated and compared with the anticipated income from timber resulting from the project. The study will be repeated every five years to evaluate the social and economic impacts of the project. The main social and economic benefits are:

According to studies carried out in the settler areas within the project zones rice cultivation rapidly degrades the soil. For this reason, the soils are left fallow for several years (4-7). As a consequence, farmers need to look for new soils for rice production, which is achieved by slashing and burning and in this way the agricultural frontier advances. This production method is very inefficient and destructive.

For the income calculation for rice production, consideration must be given to the fact that this is a very labour intensive type of production. For the production of 1 hectare, 61 working days are required with a resulting gross income of 390 USD. After deducting the costs of 156 USD (seeds, transport, herbicides, etc.) a net income of 234 USD is reached. This results in an income per working day of only 4 USD. 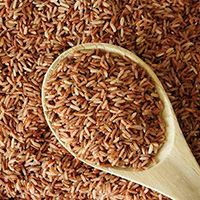 Some rice-cultivation is more intensive. It is mechanised, and fertilisers are also used. Although the harvests are higher and rice can be produced almost every year, the financial input is also high. After having produced rice over 15 to 20 years (depending on soil conditions), the financial return becomes less than the financial input and the land is then left as wasteland. However, since these lands are degraded, no natural forest recovery can be expected. 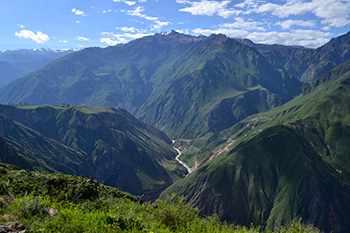 The most important environmental benefits of the forests and how this project generates these benefits are summarized below:

The identified positive environmental impacts for this project are the following:

Other impacts may exist that have not been analysed in the actual project. Recreational use and landscape values are aspects, which could provide opportunities for alternative use of the forest areas for ecotourism in the future.